Waltz Brothers Inc. is a third-generation print to perfection contract manufacturer located in Wheeling, IL. The company was opened in 1939 by three brothers whose aspirations were to produce high quality, close tolerance parts. Waltz Bros. is a go-to source for some of the largest aerospace companies in the world.

Christian Cortez, Engineering Manager at Waltz Bros., has been with the company for over thirteen years. “We’re a semi-traditional job shop, but our focus is on really tight tolerance, complex parts that are components going into a lot of aerospace functions.”

Since 2004, Waltz Bros. quoted out of their ERP, JobBOSS. But quoting solely out of JobBOSS made it difficult to keep things organized when jumping from quote to quote. Waltz Bros. receives a lot of quotes per person, which made it difficult to get through quotes in time to turn them around and win the work (their turnaround was averaging out to 14-16 days).

Another challenge Waltz Bros. faced was due to their lack of ability to follow up with quotes after they were sent out. They would send them out and continue to wonder whether or not their buyer even received it, making it difficult to determine when/how to follow up.

On top of everything, 95% of the RFQs that Waltz Bros. receives are not solid models—they’re PDFs. This file format is more difficult for less experienced estimators to visualize and quote without Christian’s help. Approximately 20% of those PDFs are also complex, requiring their team to use SOLIDWORKS to quote accurately, meaning costly license fees. Paperless Parts’ seamless integration with JobBOSS makes Waltz Bros.’ ability to go from RFQ, to Quote, to Order, to Job much easier. Quoting from PDFs also provides many features that Christian previously relied on SOLIDWORKS for, eliminating the need for those expensive seats and allowing him to quickly visualize and duplicate measurements.

Now, Waltz Bros. is able to turn quotes around much faster, with a new average quote turnaround time of 2-4 days. “The average time it would take for one person to get through a quote before was one hour, and now we’ve gotten that down to fifteen minutes,” says Christian.

The platform itself has also been helping Waltz Bros. impress their customers. “Our improved turnaround time has helped us get new work and retain existing work. I’ve had at least three customers tell me that they’re so impressed by the quotes we send out, and that they’re happy about how quickly we get quotes turned around,” says Christian. 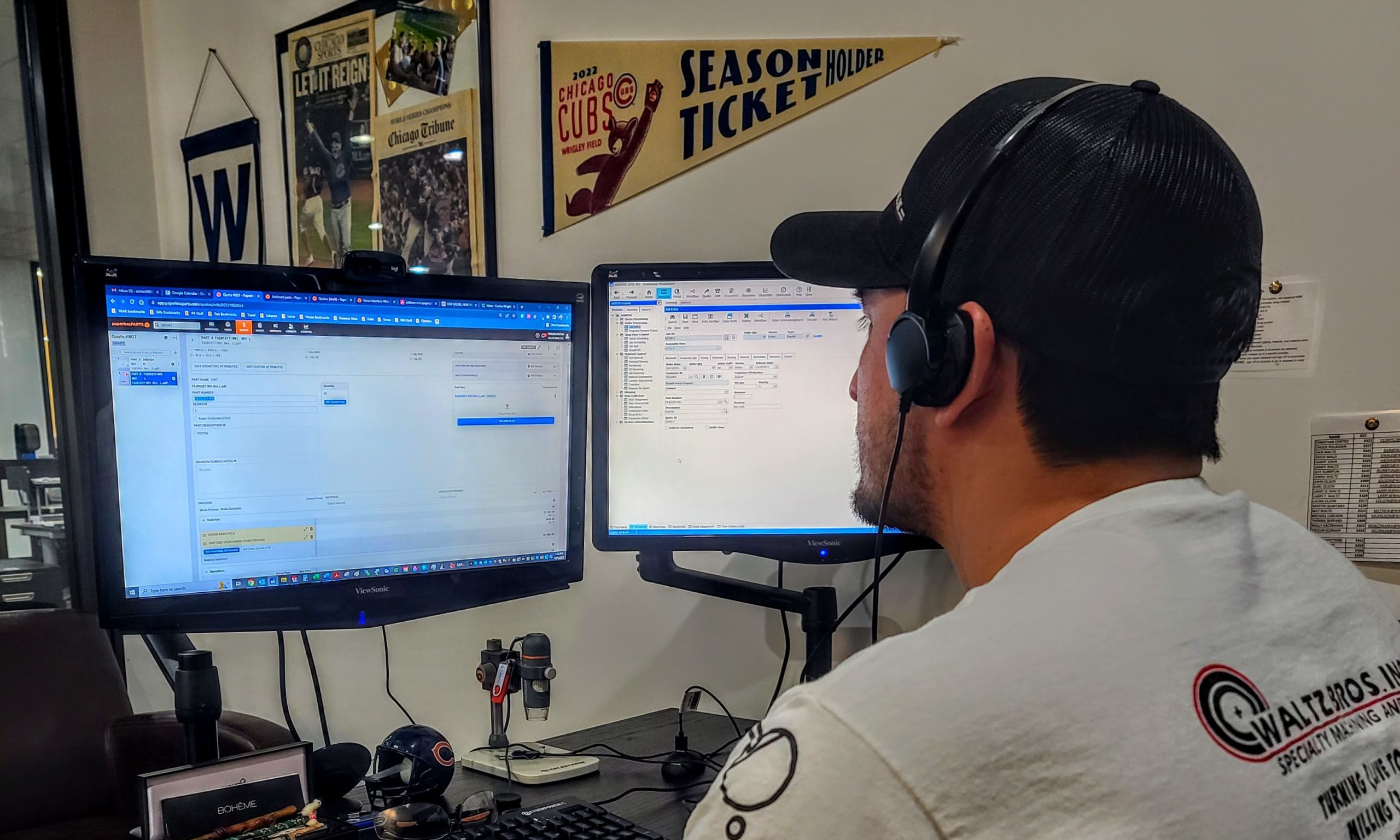 Christian also finds a lot of value in being able to follow up on outstanding quotes right from Paperless Parts. “One out of every four quotes that we send follow-ups on gets a response back. Thanks to that, we often get the ‘Oh yeah, I completely forgot to place this order,’ which saves the job for us. On the other hand, if we get the ‘Sorry, your lead time was too long,’ or ‘Your price is too high,’ that’s fine too—it’s always helpful to know why we might be losing out on jobs.”

Download our latest Custom Part Buyer Report to find out how to meet and exceed customer expectations and win more work.

Additionally, Waltz Bros. is able to work more efficiently by pulling more team members into the quoting process. Christian explains, “Our Administrative Assistant started out with little experience working in a machine shop, but she’s still able to generate the appropriate work centers, identify items on the quote or vendor operations; Paperless Parts is very easy to train someone on because they don’t have to learn the whole system.”

One surprising result of involving more people in the quoting process? Speeding up their vendor response time. “Our vendor response time has gone from eight to five days, and I attribute our Administrative Assistant getting used to the vendor chat tools in Paperless Parts and helping to get us responses faster,” Christian says.

Since implementing Paperless Parts, Waltz Bros. has been able to:

Get a demo of Paperless Parts’ seamless JobBOSS integration today. With the Paperless Parts/JobBOSS integration, our ability to go from RFQ, to Quote, to Order, to Job has improved significantly as the hand-off of responsibilities is seamless. As a result, we have been able to keep pace with our record best bookings over the last 6 months, the amount of time needed to train a new employee in quoting has been reduced in half, and the communication with our customers has never been better. Using the integration, we believe we can handle 15% growth in FY2023.